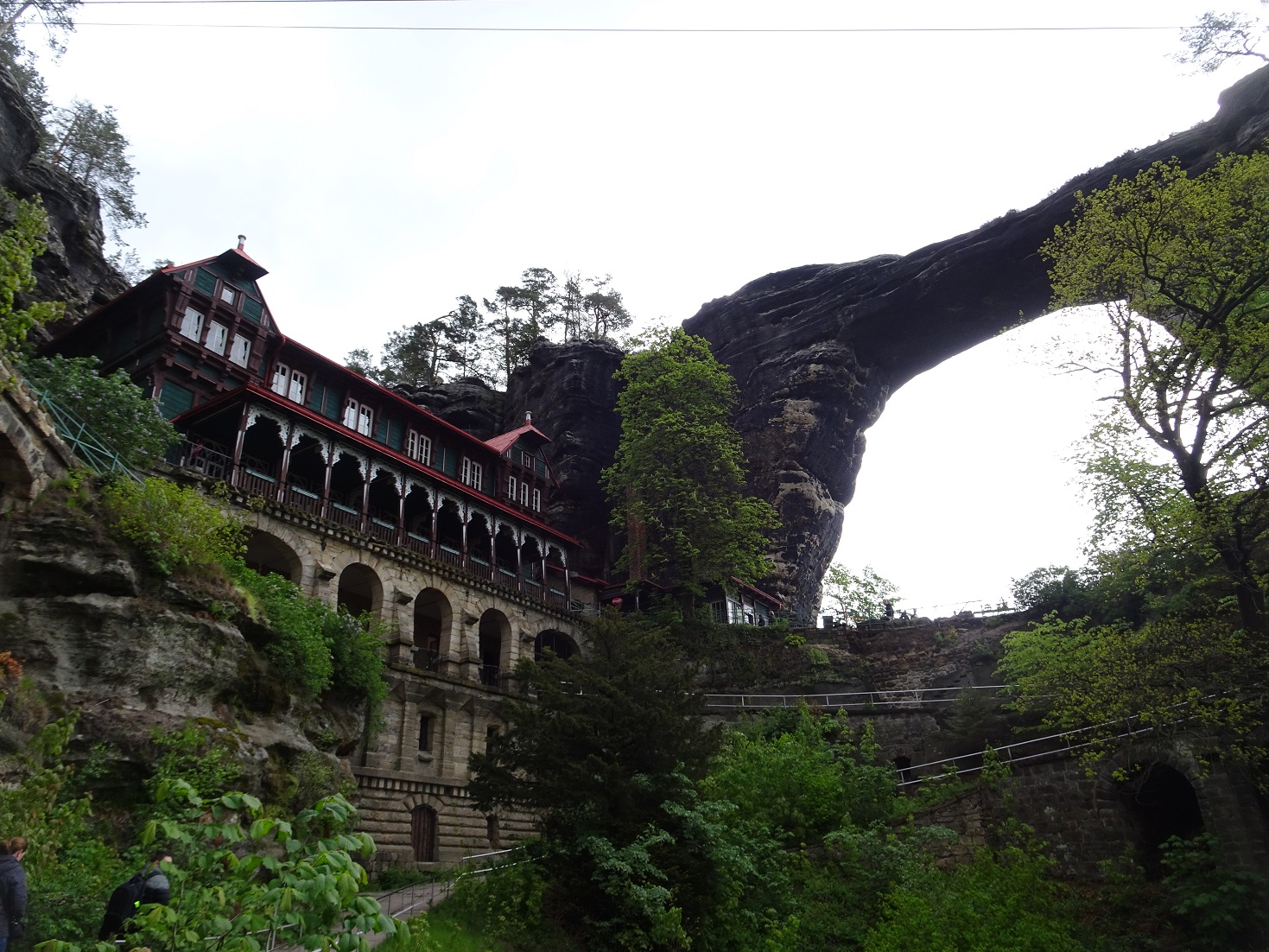 Were you aware that the Czech Republic has its only little slice of Switzerland? Well, at least in name. While not as enormous as any mountains in the alps, the natural features of the Bohemian Switzerland are impressive, beautiful and can be explored during day-hikes in the area.

Plus, unlike its namesake, there’s absolutely no chance of getting altitude sickness while hiking in this beautiful area. Here’s my suggestion for exploring the Bohemian Switzerland in one day.

Where is the Bohemian Switzerland National Park located?

This National Park in the northernmost part of Bohemia constitutes the Czech half of a trans-border natural area shared with the German federal state of Saxony called Elbe Sandstone Mountains (“Elbsandsteingebirge” in German / “Děčinská vrchovina” in Czech).

It’s a magical place with countless hiking trails that you could spend weeks exploring. If you don’t have that kind of time read on for a suggested day-hike encompassing the most important sights in the area.

What to see and do in the Bohemian Switzerland

This natural sandstone arch, occasionally also referred by its German name “Prebischtor”, is the largest of its kind in Europe and serves as the symbol for the whole National Park.  With a span of 26.5 m (87 ft.) and an inside height of 16 m (52 ft.), it’s certainly an impressive sight to behold and the one natural attraction you definitely shouldn’t miss while you’re in the area.

Until the early 1980s, visitors used to be allowed to actually walk on top of the arch, but since then the area has been off-limits to preserve the formation for generations to come. It’s no great loss, as the best views are of and not from the arch and there are countless vantage points in the surrounding area affording splendid vistas of the gate.

The impressive structure even made its way onto the radar of Hollywood locations scouts and has been featured as a filming location in several movies, most famously in the first Chronicles of Narnia movie from 2005.

Tucked away next to a high cliff facing the arch is the Falcon’s Nest, a restaurant erected in the 1880s, sporting the playful wooden latticework of the contemporary architecture. You can stop inside for a snack and drink or if you’re visiting in summer, have one of Bohemia’s famous lager beers at one of the outdoor tables, affording nice views over the surrounding countryside.

Note that access to the gate isn’t possible 24/7. It’s open from 10am to 6pm every day from April to October and from 10am to 4pm only on Saturday and Sunday from November to March. The entrance to the area is 95CZK or 4€.

Near Mezná, a few kilometers south from the Pravčická Brána Arch, the Kamenice river flows serenely through a wooded canyon. While you can explore part of it on foot, the most spectacular sections of the gorge can only be reached by boat. In the summer months, wooden punts, carrying up to 20 people are being navigated through the most picturesque sections of the canyon.

On the way the ferryman will point out various rock formations in Czech and English language and there’s even a tiny waterfall, whose water is being dammed and released when the boat is nearby. It’s a fun trip and certainly worth the fare of 80CZK (40CZK for children up to 15 years and pensioners)

You can reach the quay from Hřensko in the west by following a pleasant path along the river from the eastern end of the village for about 20 minutes or from Mezná in the east from where you’ll have to walk down to the river south of the village and then follow a path within the gorge for about 15 minutes to the quay.

The trail along the river is very pretty and occasionally leads through tunnels in the sandstone walls. A visit to the gorge can be easily combined with Pravčická Brána during a day-hike (see below).

The village itself, while small, is very pretty and warrants some of your time. You can take a stroll along the Kamenice river, check out a handful of historic buildings, like the Hotel Labe at the western end of the village, and visit the small baroque Church of Jan Nepomucký.

Still, the main reason to come here is to hike in the surrounding mountains and Hřensko makes a great base for this activity. Read on for a suggestion of a great day-hike in the area.

A great day-hike in the Bohemian Switzerland

If you only have a day in the area, you can visit the sights outlined above during a day-hike from Hřensko. The whole tour is about 17 km (10.5 mi.) and takes the better part of a day if you take your time exploring the Pravčická Brána Arch and the Edmund’s Gorge.

The entire hiking trail is marked with a green diagonal slash and starts at the eastern end of Hřensko village, from where it first follows the road, then climbs up through the forest towards the Stone Arch.

Afterwards it follows the ridge of the mountains, passing some interesting rock formations like the Křídelní stěny (“Wing Wall”), a high cliff of weathered sandstone, before it drops down to the village of Mezná. Here you could stop for a snack and drink before continuing down to the Kamenice River and through the beautiful Gorge until you reach the quay.

There you can be ferried by boat along the otherwise inaccessible part of the river and afterwards continue through the valley of the Kamenice until you finally arrive back in Hřensko, where you started.

Map of the Bohemian Switzerland Area

You can have a look at this map to get a general idea of the National Park. Included are the sights mentioned above as well as some possible hotels and guest-houses to base yourself at for your exploration.

How to get to the Bohemian Switzerland independently

The Czech Republic has a decent network of trains and long-distance buses. In most cases you’ll have to connect in Děčín, which is about 20 minutes by train or bus from Hřensko. Děčín can be reached by train from all over the country, for instance from Prague’s Main Train Station (about 1 hour 45 minutes/about 200CZK). You can search for connections on the website of the Czech National Train Network.

To reach Hřensko, you can use Bus 434 from Děčín Main Station to Krásna Lípa, which passes through Hřensko (about 20 minutes).

Alternatively, there is a train going to “Bahnhof Schöna” station on the German Side of the Elbe/Labe River, from where you’ll have to take the ferry across the river, which runs between 7.30 AM and 9.30 PM from April to October and from 8.30 AM to 5.30 PM from November to March. The crossing is included in the price of the train ticket.

You can also travel to the same train station from the Saxon Switzerland area in Germany. Trains from Bad Schandau to Schöna take only about 10 minutes, while Bad Schandau can be reached by train from Dresden in about 45 minutes.

As both Germany and the Czech Republic are member states of the Schengen Area, the border can be crossed without going through customs, making the trip speedy and hassle-free.

Organized day trips to the Bohemian Switzerland from Prague or Dresden

If you prefer your travel hassle-free and a bit more structured, you might want to consider taking an organized day trip to the area. This day tour to the Bohemian Switzerland from Prague has great reviews and includes not only a hiking tour from Hřensko to the Pravčická Brána Stone Arch but also two short boat trips through the Wild Gorge of the Kamenice River.

If you’re visiting from the German side, this day trip from Dresden additionally includes the sights mentioned above as well as a visit to the Saxon Switzerland National Park, where you can explore the famous gravity-defying Bastei Bridge.

Where to stay in the Bohemian Switzerland

Hřensko is the place were most visitors to the area base themselves and accordingly, the village has the best touristic infrastructure, with a couple of hotels and bed and breakfasts as well as plenty restaurants. We stayed at a small guest house called Ubytovani u Krivaku (Tel. +420 607680005), located on Hřensko’s main street.

Penzion Hřensko is another nearby budget option, while Hotel Kotva and the cute fairy tale-esque Stary Plynarna would be midrange options. If you’re traveling during the high season in the summer, you’d be well advised to book ahead of time as plenty of Czech and German tourists stream to the area. Other options can be found in the map above.

Where to eat in the Bohemian Switzerland

Hřensko has many small restaurants serving solid and affordable traditional Czech fare – expect plenty of goulash, dumplings and lager beer. We can recommend Restaurace U Draka, but there are plenty of other options as well.